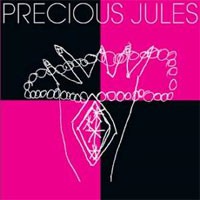 Kim Salmon (Scientists,/Beasts of Bourbon/'Grunge' inventor) Michael Stranges (Morning After Girls/Ripe) team up as 'Precious Jules' to create punk mayhem! Precious Jules' debut album is 11 slices of glam, garage, punk and pop in the tradition of Ramones, NY Dolls, T-Rex and Bowie. Their debut album, Precious Jules plays up to, and scrutinizes the notions of rock 'n' roll that have been distilled since its early days.

The tracklist - 'Cheap N Nasty', 'You're a Backlash', 'Pearls Before Swine' and ' The Urban Swamp' - alone tells you where these guys are going and where they've been - Punk, Glam and Rock 'n' Roll filtered through the post modern nineties and naughties and brought up to the minute by a couple of master-pop theoreticians THAT is Precious Jules. Having been repeatedly invited by various international touring artists to fill their support spots, Kim Salmon tired of playing alone and eventually asking producer friend Mike Stranges to accompany him on the drums. The pair of them would rock out on punk back catalogue and standards adding their own newies with each successive show.

The duo eventually tracked 9 songs and it was clear from the results that a suitable moniker was needed. Given that they'd just recorded 'Cheap 'n' Nasty' by Kim's 1977 Perth Punk outfit The Cheap Nasties it wasn't difficult to come up with something opposite yet similar and Precious Jules came into being. Precious Jules have carefully cut, added to and indeed 'polished' their collection of gems. They may well move onto some other unlikely genre in the future but for this album, P.J.s have got something to prove - that even though there are just two of them, their rock is the hardest. Diamond hard in fact!