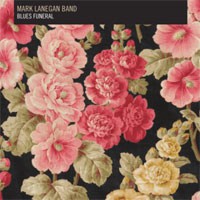 ‘Blues Funeral’ is the new Mark Lanegan Band record, the first since 2004’s ‘Bubblegum’, recorded in Hollywood, California by Alain Johannes at his 11ad studio. In the mean time, he’s been busy working with the likes of Isobel Campbell, Twilight Singers, Gutter Twins and Soulsavers. Here, the music was played by Johannes and Jack Irons with appearances from Greg Dulli, Josh Homme et al.

The awesome ‘Gravedigger’s Song’ kicks things off, with it’s pounding, claustrophobic beats. The tempo slows for the next track ‘Bleeding Muddy Water’, with it’s soulful, pulsing groove. In fact, the whole album ‘grooves’ to varying degrees, from slow and soulful, to Kraut-ish metronomy, to almost funky – yes really! There’s a lot going on here, and it’s taken me a good few listens to get to grips with it, but as ever, Mark’s dark tales, delivered in his distinctive gravelly tones have won me over.