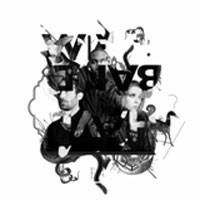 'Ternion', from the Latin for a group of three, sees We Have Band make a stylistic leap on from their debut 'WHB', which despite its critical acclaim the band were keen not to repeat.

Dede Wegg-Prosser: "The first album was us getting together and having fun. We really weren’t expecting anyone else to hear it or come watch us play it. Whereas this time we knew we were making a record with the knowledge that people would be listening, it gives you a very different mindset."

Darren Bancroft: "We were very aware of where out first album sat and whilst we were happy with it we knew it wasn't a place we wanted to revisit. We knew there was a task ahead of us in writing this record; we needed to write a different kind of record. People would say to us oh you're a 'buzz band' or 'you're an electro band' and that was fine, but for us it was also clear it was time to move forward."

Moving forward meant a radical change in how the band approached writing the new album. From the music through to the lyrics they wanted to create something 'timeless', and so they began to look inward, mining the experiences that they had shared as their career had taken off.

The result is a very different record, an intensely personal album that manages to be both uplifting and melancholic. Gone are the nonsense lyrics replaced by frank and honest accounts of their relationships, struggles to make sense of the world around them and the effect, both physical and emotional, of a life on the road.

Musically too, 'Ternion' reveals a very different band to the one who first burst onto the scene in 2008. The increased use of live instrumentation and extra time spent getting every sound just right with ex Clor member and Foals producer Luke Smith at his Flesh and Bone Studios in London shines through every song.

Thomas Wegg-Prosser: "The first album was really digital, chopped up and quick, and those things are all quite urban. You can listen to it and pin down when it was recorded and what scene it was part of, but with this record we've moved away from that sound. There's a lot of warmth in the band and that comes through in this record."