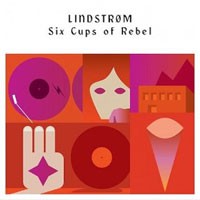 For a limited period both the vinyl and CD include a free 'Exclusive Bonus Tsugi Mixtape' CD.

Five… four… three… two… one…With the latest album from dance producer Hans-Peter Lindstrøm, Norway’s latest entry in the space race has been launched out of the wooded outskirts of Oslo. "Six Cups Of Rebel", Lindstrøm’s fourth solo album, is a super-sized cosmic disco rocket that burns up a galaxy of eclectic influences in its wake, from Bach to Deep Purple, from prog rock and arpeggiator disco to acid house, while sounding sleek and utterly contemporary. He may worship at the temple of godlike European DJs from the 80s like Daniele Baldelli and Beppe Loda, but the relentless, occasionally monumental scale of "Six Cups Of Rebel" has the power to move mountains all by itself.

From the opening “No Release” - a five-minute coitus interruptus of cascading cathedral organ - to the pumping Detroit pistons of “Call Me Anytime” and the wah-wah stabs and fizzing 808 basslines of the title track, "Six Cups Of Rebel" acts like a star map of Lindstrøm’s own voyage to the outer limits of electronic music. When he holds back, as on the ten-minute “Hina”, it’s only to let rip with added propulsion, like a satellite using a planet’s orbit to push it to the next level.

Lindstrom & ChristabelleReal Life Is No Cool

LindstromWhere You Go I Go Too