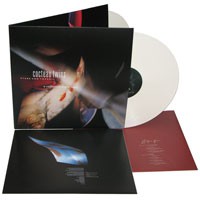 ‘Stars and Topsoil’, Cocteau Twins’ collection of the best of their 4AD years, is belatedly issued on vinyl. Perfectly suited to the format, there’s a greater cohesion to the tracks when they are split into four sides.

Following their ascent from alternative novices to universally acclaimed artists, ‘Stars and Topsoil’ is a fine testament to one of the most original bands to emerge in the last three decades. Over a career at 4AD that spanned six albums and seven eps, Cocteau Twins retained an intriguing uniqueness of style that defied comparison. Elizabeth Fraser (vocals), Robin Guthrie (guitars) and Simon Raymonde (bass guitar) were always fiercely protective of their privacy, preferring to let the music speak for itself; it spoke volumes and continues to do so.

From day one Cocteau Twins had something special; Liz’s glittering vocals, unintelligible and perfect, Robin’s edgy guitar, all grounded by Simon’s bass. This chronological collection is a fitting reminder of why Cocteau Twins are so important: musical visionaries who transcended convention yet achieved massive international success.