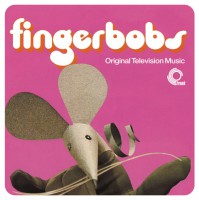 At last! The classic music from this important TV series is now available! Yes, to many people who grew up near a television in the 1970s and 1980s, Fingerbobs was a curious, formative and hugely inspiring series. Only 13 episode were made but were often repeated. It starred the audacious Fingermouse, a host of his paper friends (Scampi, Gulliver, Flash), and was fronted by folk musician, actor and former Play School presenter Rick Jones as “Yoffy”. Each episode involved simple craft, music and a story or fable based on that week’s theme (such as sound, wood, shapes and shadows). The whole series was conceived, created and modelled in a briliant home made style by the legendary husband and wife team Joanne and Michael Cole, the minds behind much of Playschool, the books and TV series Bod, and Ragtime.

The Fingerbobs album has been quite hard to put together; there are no masters and very little paper based archive to speak of, so no set stills, no paper puppets. All that really remains are a few scraps of paper in the Cole’s very small archive and the Fingerbobs annual, which contains nothing but pecualir drawings, none that really relate to the show. But, as the album was going to print Lo Cole found an exceptionally rare promotional flyer for the series in 1973 when it was first aired, and this wonderful little gem is what has been used to make the fabulous artwork.

In order to produce a musical album worthy of release, Jonny Trunk entrusted the ears and musical abilities of Jon Brooks (AKA The Advisory Circle) to pull together a musical collage of the whole series. So, we have all the themes, all the songs, all the instrumentals, a scattering of stories too. The music is a touch folky, a little whimsical, classically nostalgic, humble, hip, witty and occasionally camp (Gulliver’s song). Fingerbobs was possibly the last remaining unreleased score from TVs golden era, and finally, thanks to this first ever release, we can now enjoy it whenever or wherever we want. Like in the car with the kids. Which is a very good thing indeed.

Various ArtistsNow We Are Ten - A Trunk Records Sampler

Barry GrayStand By For Adverts

Leona AndersonMusic To Suffer By (Remastered)