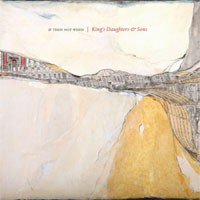 Three years in the making ‘If Then Not When’ was recorded by Kevin Ratterman (California Guitar Trio, My Morning Jacket, Wax Fang) and mastered by Bob Weston (Shellac).

King’s Daughters & Sons are informed by, though not beholden to, the history of its respective members: haunting, sparse and at times explosively unsettling, they have been described as part William Faulkner, part Led Zeppelin.

The music on the album deals mostly with ghost stories, murder ballads and grimoires: dark narratives that recall Nick Cave and the work of Louisville luminaries Slint.

1. Sleeping Colony
2. Arc Of The Absentee
3. Dead Letter Office
4. The Anniversary
5. A Storm Kept Them Away
6. Volunteer
7. Lorelei
8. Open Sky