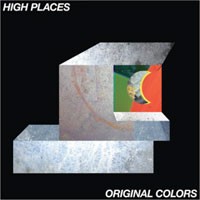 High Places is Rob Barber and Mary Pearson. The two create danceable pop music that is both artistic and refined. While very much involved in the music scene of New York and later migrating to Los Angeles, High Places has always been on its own unique musical path. The consistent dialog between the duo over the span of three albums is always through rhythmic and melodic ambient space. The two mix their particular internal rhythms with a long-standing love of UK and US dance sensibilities such as that of UK garage, drum and bass, Chicago/NYC house, Detroit techno, dub reggae, and electro dancehall. The early influence of visceral live experiences of NYC/Philly hip hop of the late ‘80s and early ‘90s is evidenced in the band’s massive sound system. With Original Colors, they are at once pushing forward with much heavier and more complex beats, but also returning to their more gritty, electro-acoustic roots.

Recorded in the band’s home studios in Los Angeles, Original Colors dives headlong into driving bass pulses and dynamic rhythms. Rob and Mary’s singular visions are built upon a foundation of syncopated beats, while still adhering to their layered, collaborative style of writing. From the four-on-the-floor dance rhythms of album opener “Year Off” to the more extended and darker phrases of tracks like “Sophia”, the end result is more forceful than ever. Throughout their nearly five years of existence, the band has traveled extensively and performed in a multitude of environments. Whether it’s at the Guggenheim Museum in Manhattan or in an industrial warehouse in Santiago, Chile, their travels are reflected in Original Colors. The album is dotted with sun-drenched references to Australia’s inimitable foliage, the expansive desert of Northern Mexico, and the crystal, blue waters of the Indian Ocean. Such allusions are presented over a bed of swirling stereo rhythms and infectious melodies that are the band’s signature. Each track possesses a specific texture and emotion that serve to create a variegated yet unified album that is held together by the binding force of Mary’s mezzosoprano vocals. The air of naïveté has been peeled away since the first album, and her voice is pushed to the fore; liberated from the dense sonic waves of previous work, and blossoming into a truly melodic instrument.

Visual art plays an important role in Mary and Rob’s collaboration. The two make video projections for their stage shows, keep a photo blog that documents their travels (http://hellohighplaces.blogspot.com), and create their own album artwork. In this way and others, Mary and Rob challenge the conventional parameters of a rock band and instead give us a multisensory aesthetic partnership that continually defies expectations.

High Places has plans to tour this fall; bringing their sound to new environments, always in the hope of collecting experiences that will shape the evolution of their truly unique sound.