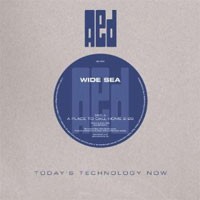 Wide Sea are a four piece family band of three brothers, the Rallas, and their cousin on drums. They presently live in Kilburn, North West London, where they travelled to in 2009 from their home near Frankfurt in Germany, literally seeking a new life and an outlet for their music they couldn’t find in their homeland. Lead singer Arthur was an Edwyn Collins fan and they sought him out. Their beautiful songs and harmonic sensibilities so impressed Edwyn and Seb, his studio side-kick, that they recorded an album with the band, and this is their debut single. The album, by the same name, follows in November.

A: A Place To Call Home
B: London Nights