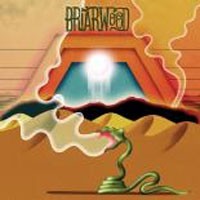 When James Jackson Toth, aka Wooden Wand, was invited to record for a split 7" with his friend Duquette Johnston (formerly of Verbena) and his band the Gum Creek Killers for release on the Communicating Vessels label, his first impulse was to send a track from his legendary archives of unreleased material. But Duquette suggested Toth visit him in Birmingham and they record both sides of the record together, from scratch, using the same band, at Ol Elegante Studios in Homewood, AL. Toth claimed that it was one of the most positive recording experiences that he ever had, and immediately wanted to make a whole record this way. Duquette made Toth put his money where his mouth is and invited him back down to Homewood to record the new Wooden Wand album with the Gum Creek Killers, with Duquette and Les Nuby (Vulture Whale, ex-Verbena) producing. Toth added to this group his constant foil and best friend Brian Lowery and Jody Nelson of Through The Sparks, and the Briarwood Virgins were born. The sessions were casual and loose, yielding some of the most 'rock and roll' sounding music of Toth's long career.

For an artist known in some circles as something of a 'folkie,' it's interesting to note that this album contains only a single track of acoustic guitar. "This is the album I've been trying to make since Second Attention," said Toth, referring to his 2006 on Kill Rock Stars. The album was mixed by Stephen Goose Trageser (who also helped mix Wooden Wand's 2010 album Death Seat, on Michael Gira's Young God label) and mastered by Matt Pence (Centro-Matic). The beautiful cover art was done by Robert Beatty, of Hair Police fame. Briarwood represents the latest direction by an artist who continuously confounds, befuddles and challenges his loyal fans, but what do you expect from a guy with a tattoo on his wrist that says "What Would Neil Young Do?" Toth used Kickstarter and the generous pledges of fans and friends to fund the recording and mixing of this album.