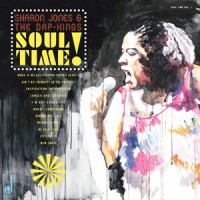 "Soul Time!" is an exploration of  the full range of Sharon Jones & The Dap-Kings' dynamic sound through twelve songs handpicked by the Daptone Records gang, each one a precious exclusive.

The needle drops on "Genuine Pts. 1 & 2", a supercharged funk arrangement that evokes the late Godfather not only with the spirited syncopation of the Dap-Kings rhythms, but also with the raw power of Jones’ voice. "Longer And Stronger", written for Jones' 50th birthday, is a deep mid-tempo soul celebration of the strength and determination with which Sharon Jones has earned her long overdue success. The theme of empowerment pushes on through “He Said I Can”, an energetic stomper belted over an arrangement reminiscent of the Isley Brothers early-70s heyday, and “I’m Not Gonna Cry” brings us back to the raw funk intensity of "Genuine" with a squealing tenor solo and a fiery vocal. .

“What If We All Stopped Paying Taxes?” kicks the second side off with a bang. This mid-tempo groove is accentuated by the conga work of the legendary Johnny Griggs of JB’s fame. And who says Christmas can’t be soulful? Jones et al. make it so over their sought after holiday exclusive, “Ain’t No Chimneys in the Projects”. Next is an energetic romp into Motown intensity with “New Shoes”, a walking-out-the door belter that picks up where "These Boots Were Made For Walking" left off. The record winds up with a deep laid back cover of Shuggie Otis’ psychedelic soul jam “Inspiration Information”.

From the first note to the last, "Soul Time!" confirms this band’s place at the head of the table as the world’s greatest funk and soul showband. Whether you’re a lifetime fan, or just getting turned on, Sharon Jones & the Dap-Kings’ have yet again made a record that will blow your mind. Get ready world, because It’s Soul Time!

Randa & The Soul KingdomWhat You Need