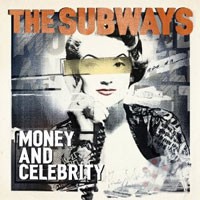 The Welwyn Garden City trio (Billy Lunn - guitar/vocals, Charlotte Cooper - bass/vocals and Josh Morgan - drums) started playing in their local area in 2003 and, after beating 5000 applicants, they won a competition slot to play Glastonbury, they released their debut album "Young For Eternity" in 2005. Quickly becoming festival favourites with their energetic and thrilling live shows, the band travelled the world before starting work on the follow up "All Or Nothing" with producer Butch Vig. On it's release in summer 2008 the band again hit all the Uk and European festivals consolidating their reputation as a dynamite live act. Finishing the album cyle in style with a show at Rock Am Ring Germany in front of a 75,000 strong crowd.

The Subways released the brand new song "It's A Party" on Thursday afternoon (16th June) via their website with no prior warning, and the track was downloaded over 1,000 times within the hour almost crashing their server. An infectious pop-rock sound with killer hooks and sing along chorus the song is sure to sound even better when you're bouncing around at a show.

This 12 track album features music across the spectrum, melding their first album's melodic immediacy with the second's energetic rock power. As the title suggest, the songs were inspired by the overwhelming celebrity culture and also the financial crisis affecting the world today and how these things influence people.

The SubwaysI'm In Love And It's Burning In My Soul

The SubwaysI Won't Let You Down