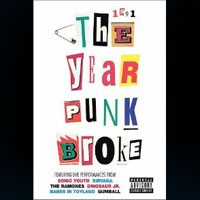 2011 marks the 20th Anniversary of '1991: The Year Punk Broke', a pivotal film centred around the lives and experiences of avant-garde music pioneers Sonic Youth during their 1991 European club and festival tour. The film documents their headline tour as they introduced a new breed of bands who were all on the verge of taking on the world and forever changing the course of music.

Featuring Nirvana, The Ramones, Dinosaur Jr., Babes In Toyland and Gumball. It was filmed just prior to the release of Nirvana's 'Nevermind' in 1991 - includes the last footage of Nirvana before the band's meteoric success. Including them performing 'Smells Like Teen Spirit','Polly', 'Negative Creep' and a very rare and unseen performance of 'In Bloom'.

All footage has been fully restored with audio re-synced and re-mastered in uncompressed PCM stereo.