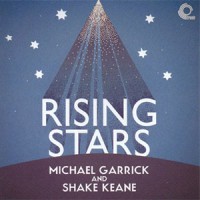 Wow. 1964 was a pretty special year, especially for groovy jazz in Britain. Not only did it see the release of "Moonscape" by the Michael Garrick Trio but also the birth of these fine and exceptionally rare recordings. Modern, jazzy, exotic and progressive, early British jazz rarely sounded so good or beautiful.

In 1964 the Modern British jazz scene was growing, progressing and bursting out in creative musical rashes. Following the release of Moonscape (The UKs rarest British jazz LP), Michael Garrick teamed up with horn legend Shake Keane to cut an EP of modern ideas in a quartet setting called "A Case Of Jazz". It was issued the same year in a run of just 99 copies. At the same time, flugelhorn maestro Shake Keane was working with several arrangers and set ups, one of the results being a peculair (and possibly unreleased) acetate of four cues: two recorded with The Hastings Girls Choir, two in a small but lively and slightly latin combo.

Coming directly from Michael Garrick’s own archive, these exceptionally rare eight cues from 1964 have now been brought together for this unusual and exciting release. Opening with two cues with Keane and the Hastings Girls Choir, the music is etheral and strangely exotic. Moving then through a fine British bossa nova and into the quartet recordings we find the music pleasing, progressive (for 1964), creative and exciting. Also of note is the mighty fine Sun Maiden, which has the kind of classic piano riff and repetitive regal rhythm so sought after by many jazz collectors. These tracks and complete album are worthy additions to the growing archive of classic modern Brtitish period jazz, and feature two major artist flourishing early in their careers.