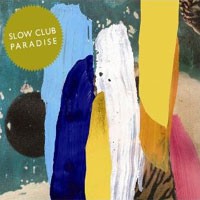 Paradise bears the touch of a songwriting unit who share and divide. Songs begin and end with Rebecca and Charles swapping verses, even when the song itself is deeply personal to one of them. On Never Look Back, which bubbles into existence with cooing two-part harmony, Charles delivers the startling lines: “Baby brother in the next room, trying to bring him back to life”. It sees the 23 year-old singer recalling a dream in which an imaginary brother lays dying in the next room. On forthcoming single Two Cousins, Rebecca imagines that life is simply a journey which ends in our return to childhood when we die. “Hold on to where you’re from, it’s where you heart goes when you’re done”. Gold Mountain drifts languidly, like the lonely walk home after a drunken night out. It is, in fact, yet another song in which the bittersweet melody belies the arresting theme at the heart of the lyrics- “They have found, when life is pouring out, you are the only one that counts-“ Earth and Ash is about Rebecca’s closeness to her granddad, and her underlying fear about what will happen when he dies. “I've not played him the song, he wouldn't get it,” says Rebecca, “He always says (adopting a gruff Sheffield accent): 'why can't you play one of them Eva Cassidy songs? Or something by Joni Mitchell?'”, so I can't imagine a song about him dying is the introduction to Slow Club he really needs.”

Slow Club’s currency is songwriting which sees romance in the unlikeliest of corners, and Paradise applies a lighter, more honed lyrical touch to telling their story. More than anything, Paradise is a platform for Slow Club’s mordant Englishness at its best, displaying a restraint and self-deprecating wit even in the darkest of sentiments.

The DecemberistsThe Hazards Of Love