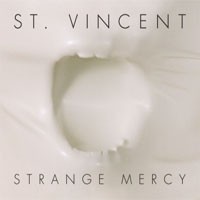 St. Vincent, the nom-de-stage of Annie Clark, releases the new album, ‘Strange Mercy’. Having worked together on 2009’s ‘Actor’, Clark reunited with producer John Congleton and recorded the album in her hometown of Dallas, TX at Elmwood Studios.

Clark’s virtuosity has been long recognised, and ‘Strange Mercy’ finds St. Vincent redefining the idea of the guitar hero, utilising the instrument as a pointillist artist might wield a brush. Countless judiciously placed riffs and instrumental flares, each distinct and unique, cohere into grand tableaus. On ‘Cruel’, she elicits punchy bursts like an R&B horn section. ‘Cheerleader’ froths and boils, with deep and fuzzy guitars bubbling up to the surface, while ‘Surgeon’ twirls about endlessly, Clark’s vocals dancing amid a blizzard of notes.

‘Strange Mercy’ isn’t an entirely solitary affair either, with Clark joined by a host of other musicians. Included among them are Grammy Award winning Bobby Sparks on mini Moog, clavinet, Arp and Wurlitzer, Midlake’s MacKenzie Smith on drums and Daniel Hart on violin. Also contributing were Beck keyboardist and musical director Brian LeBarton, Evan Smith on woodwinds and Phil Palazzolo.