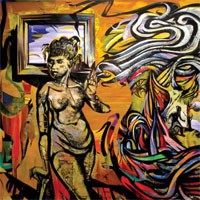 Led by art/punk legend Carla Bozulich, who previously fronted The Geraldine Fibbers and Ethyl Meatplow. Fourth full-length album from Evangelista, which is Bozulich’s primary and most personal current musical project following the critically acclaimed Prince Of Truth (2009) that cemented Carla Bozulich’s reputation for aesthetic quality, intensity and iconoclasm as she entered a third decade of tireless artistic and musical activity. [Prince Of Truth is] a fascinating interplay of conventional song forms and more experimental tendencies...there’s a barely restrained brutality to this music, which seems always on the edge of something, either a descent into the abyss or elevation to some majestic heights... POPMATTERS.

Evangelista’s new album continues to broaden the sonic canvas against which Bozulich deploys her distinctive voice and lyricism. In Animal Tongue reflects Bozulich’s escape from her Los Angeles home base and an increasingly nomadic existence in the last couple of years, devoted in equal parts to collaboration and improvisation with a wide range of players in diverse contexts, the conception and execution of site-specific sound/art events and residencies, rocking the circuit with Evangelista (equally at home in bright museums and dingy clubs) and retreats to the American desert. In Animal Tongue was chiefly written and recorded by Bozulich, in a variety of locations, driven (in Carla’s words) “by the forces of rocks, evolution, geology, drugs, boxing, everything-ology and dead stuff that makes the dirt and cement and the tress grow. Plus real versus fake!!!” We’re pretty sure this doesn’t mean she was actually taking drugs, but without doubt the album steams and bubbles like a surreal simmering cauldron, with carefully metered elements stirred and coagulating around a core of low-end provided by Tara Barnes on bass, seasoned with piano, organ and cut-and-paste arrangements by Dominic Cramp. This core trio is augmented by Sam Mickens (The Dead Science), Shahzad Ismaily (Laurie Anderson, Secret Chiefs, Sam Amidon) and John Eichenseer (jhno), who contribute to several tracks. Through it all, Bozulich’s powerfully adventurous voice weaves vital, semi-improvisatory melodies of gasping, restrained intensity (“Artificial Lamb”, “Bells Ring Fire”), brooding incantation (“In Animal Tongue”, “Hands Of Leather”, “Die Alone”) and a rich half-whispered alto (“Black Jesus”, “Enter The Prince”). In Animal Tongue is a superb addition to Bozulich’s canon and as original a voice as can be found at the current nexus of punk, poetry, and experimental music.