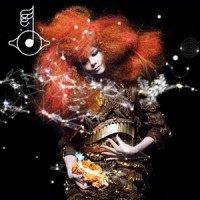 'Biophilia' is an interdisciplinary exploration of the universe and its physical forces - particularly those where music, nature, and technology meet - inspired by these relationships between musical structures and natural phenomena, from the atomic to the cosmic.

As Bjork plays neither piano or guitar, new musical instruments were specially developed for the album; The Tesla coil was used as a musical instrument on the song "Thunderbolt". A gameleste, a mixture between a gamelan and a celesta which was programmed in order to be played remotely by an iPad, was also used in several songs.

For the music, Björk related the phenomenon the song describes to a musical structure or resource. For example; the song "Moon" has different musical cycles that repeat throughout the song; the song "Thunderbolt" contains arpeggios, inspired by the time between when lightning is seen and thunder is heard; and in "Solstice", the counterpoint makes reference to the movement of planets and the Earth rotation, and the pendulums used on the song make tribute to the Foucault pendulum.

A combination of the otherworldy and electronic, on "Biophilla" Bjork has come up with another immersive and experimental album that will ensnare you with wonderment.