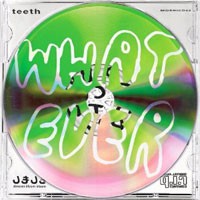 The London based electronic punk trio, rose to infamy at breakneck speed since forming in 2008. Consisting of composer Ximon Tayki, vocalist Veronica So, and drummer Simon Whybray, TEETH enraptured a global audience with jubilant, no-rave jams and hacker dance anthems.

The ten-track debut album is a veritable slice of lo-fi electro noise-pop with riot-grrrl vocals emulating the hi-NRG of their raucous stage tearing live shows, featuring current single Care Bear and soon to be released Flowers.

Bent on demolishing stages at night clubs, festivals, and warehouse parties with as much distorted noise as smooth synth melodies, TEETH deliver with an unapologetic edge. Their lo-fi, noise-pop assault is coupled with So’s equally dynamic vocal performance that suggests a cross between a euro-pop princess and a riot-grrrl. The stroboscopic live shows and relentless online persona make TEETH incomparable amongst their contemporaries, although media outlets like Dazed and Confused state TEETH are “…more epic than Battles, [and] cheerier than Throbbing Gristle.”

Hailed as “a nastier Yeah Yeah Yeahs and a subtler Melt Banana” by the 405 and boggling the minds of critics who attempt to pin down their multitude of styles as “...acid rave, dance-hall, pop, punk, grunge, acid house, tropical and all out weird shyt,” (MTV UK).