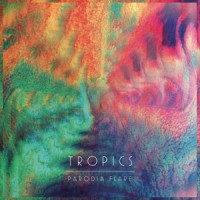 Tropics is Chris Ward, a British producer and multi-instrumentalist in his early 20s signed to Planet Mu. Since the release of his debut single ‘Soft Vision’, things have moved on. The synth-pop of his early tracks has evolved into a more substantial and personal sound on this, his debut album. ‘Parodia Flare’ features Chris as a multi-instrumental auteur, playing drums, guitar, and a range of synths and electronic boxes, as well as singing on these songs.

Coming from a family where music was always played, it made sense as a musician for Chris to act almost as a conduit by wiring the sounds he enjoyed growing up with into his own creations. The music he makes weaves vintage sounds and Rhodes keyboards, alongside banks of old synths, software and guitars, live drums and electric bass. Tropics is a suitable name for Chris’s music as each song is like a warm analogue jungle of sounds, drawn into focus by Chris’ naive singing voice and his knack for a lush melody. Given that the album was recorded in a walk-in wardrobe at his house, the steamy heat that the album gives off is a testament to his imagination.

The opening short 'Navajo' sets the scene with atmospheric clouds of reverbed chords and electric guitar, quickly followed by recent single ‘Mouves’ with its gently sung verses disappearing into clouds of echoey Rhodes chords and floating synths with low-slung New Order-esque bass and soft drums keeping the track in shape. Next up ‘Parodia Flare’ majestically stretches shimmering keyboard tones and a light guitar over a tight bass and drums, gently teasing out the serene atmosphere. ‘Going Back’ features a keyboard refrain borrowed from a 70s jazz fusion track, with a low bass and Chris snowy voice cutting through the middle of phased guitars.

‘Wear Out’ is the morning after, sounding like an exhausted take on late period Beatles, with a lolloping drum beat and horns that sound like they’re drunk, interrupted by shimmering marimbas while cold keys screech in the background. ‘Celebrate’, revised for the album, is a vortex of aerial dub, with echoes and reverbs layering and looping over a very minimal drum and sub-bass, the whole track moving in glorious slow motion. 'Figures', meanwhile, delicately projects Chris's whispered vocals onto a chord borrowed from late 80s Detroit techno, inside a chilly electronic atmosphere that gradually breaks into an 80’s electro funk bassline.

‘Telassar’ is a soft focus 80s synth epic, while 'Playgrounds' is more upbeat, with lyrics remembering the past. ‘After Visiting’ is made out of a strange airy atmosphere, full of tiny dropped-in details and smudged synths stretched over minimal drum pads borrowed from dubstep, while 'Sapphire' is based around a repeating piano refrain, guitar, sax and vocals. Final track 'On The Move' sounds like prime Chicago post rock but with the Mizell brothers on production, it’s musical mixture that tidily bookends the album.