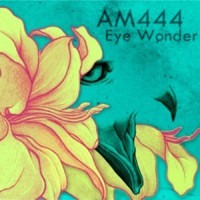 AM444 is a Shanghai based project of Chinese singer ChaCha (Kode9, Clive Chin, Jimi Tenor, Desto etc) and Dutch producer/dj Jay.Soul (Mr. Windmill & Jay.Soul, Sole Profit, Cecilia Stalin, etc). After years of thoughts, discussions and drunken promises, the pair have finally been in the studio for the past few months and the result is their 8 song debut release Eye Wonder.

It's a jazzy, funked up, dubbed out, Chinese language sonic assault and some of the most exciting music to come out of Shanghai in a while, already receiving radio play in London, LA, Europe and around Asia. Although hard to say what genre AM444 fits into, with elements of hip-hop, electronica, funk, dub, pop and soul, it's just sounding super dope. From the deep dreamy grooves of ‘Shen Jing Mo Shao’ to the full on digital bomb ‘Ni Wen Wo Ba’, Eye Wonder is a landmark release for Chinese underground music.