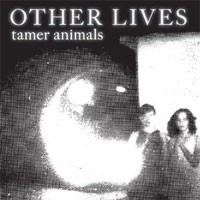 Taking over 14 painstaking months to put together, ‘Tamer Animals’ was inspired by Sigur Ros, Ennio Morricone and Godspeed You Black Emperor, and is sure to appeal to fans of Grizzly Bear, Kurt Vile and Fleet Foxes.

“Tamer Animals’ feels organic and lovingly crafted, a record whose lushness often invites you to simply collapse into it” – Pitchfork.

Laura says: This is looking like a contender for my album of the year at the moment - loving it!

Martin says: The broad, organic aspects of Other Lives’ “Tamer Animals” is a world removed from the cooler landscapes of its self-titled predecessor. It’s an altogether more temperate, thoughtful beast, grander in scope without being grandiose; Piano, bassoon, bass clarinet, cello, trumpet, French horn and keyboards coiling epic but softly crafted melodies around Jesse Tabish’s humane reflections, double tracked for warmth.
The album’s contemplative sound compliments and reflects what seems to be a growing awareness and acceptance of nature’s power, at once quietly awestruck and accepting of its place in the grand scheme; “Old Statues” ponders on the impermanence of man-made structures, a sentiment further underlined by song titles such as “Weather”, “Desert” and “Dust Bowl III”. Sombre it is not, however; the feeling is more that of awakening, of wonder, and it’s beautifully expressed – according to Other Lives, this album aims for the heart, and that’s exactly where it hits, dead centre.

Andy says: This is great. The drive of The National mixed with the wistfulness of Mercury Rev. People are gonna love this record.