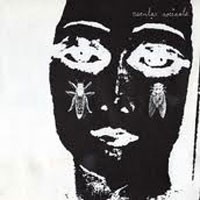 Nucular Aminals squeeze a lot onto their new 7”. This is the first single released off of their S/T full-length [KLP233] and it shifts smoothly from surf to pop to rock and back again. The amount of fun you find yourself having while listening to these tracks is equal to at least two full-length albums, maybe four, but de¬finitely not ¬five, that would be crazy talk. These Portland based Aminals (Robert Comitz, Erin Schmith, Jheremy Grigsby, and Wiley Hickson) bring a combination of talents to the mix here that they’ve gained from previous musical endeavors. Cormitz has previously played with Hornet Leg, and Schmith and he are both formerly of San Francisco’s Marriage + Cancer. The band is touring the U.S now in support of their album and have upcoming dates in Seattle and Portland. This PNW band is used to cloudy days and drizzle, but their music is nothing but blue skies. If general happiness isn’t enough for you, then maybe the promise of dancing will win you over. Put this little toot of a 7” on while you’re doing some sort of task, and before you know it your toes will be tapping, shoulders will be rolling. Hell, you may even find yourself doing that snapping and pointing dance that’s been made popular by moms and aunties at wedding receptions. No, no. You’ll do far better. I can tell just by looking at you.

Side B:
2. Kill Your Dogs
3. Garrison + Phillips/Garrison Phillips

The NeatNew Kids / Good In Bed