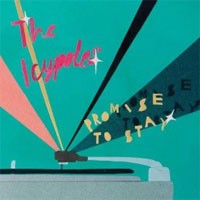 ‘The Icypoles’ Story…The Icypoles grew out of a soundtrack to an experimental film. Here is the scene: a girl writes into a magazine with a problem about her teenage love life. She doesn’t know if she’s too young for love. The magazine is from a by-gone era, the music sounds something like Sixteen Candles with backing vocals to a ‘Dear Editor’ soliloquy. During the recording Isobel Knowles discovered a love for 60s girl group garage bands and film music that creates a particular dark ambience. She work-shopped some band names with her best friends Tara Shackell and Kim White and together with them created the idea of The Icypoles. Suddenly there was a new reason to write music and a small repertoire emerged. The songs featured on debut release, 'Promise To Stay' represent this first collection. Tara and Isobel were invited to join Architecture in Helsinki soon after The Icypoles started playing to audiences and there was a long pause in the development of the band while AIH toured the globe. But the idea stayed strong and more songs showed their faces over the years. The time came to take The Icypoles more seriously. The girls found a new drummer, Lani Sommer, and together went into the recording studio (a kitchen in a temporary house). The recordings were interspersed with shows around Melbourne and small tours (Sydney, Stockholm and New York City!). A cassette came out in London with Sexbeat ‘zine. Eventually some more recordings were made with producer, Haima Marriott and the mixing process began. Isobel and Haima had worked together on those first soundtrack recordings and revisited their recording experiments to come up with a sound for The Icypoles.