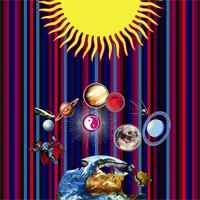 "So, we get a tape of this in the post, yes, a tape, and thought it was pretty wild, then heard nothing...then we get a CDR, well two of them, some mix cassette, and a CD containing some OTT modern day Pop Art sleeve design that is retina rubbling!....with a scrawled note claiming, "when you put the record out, you have to limit it to 500 LPs with a bonus free CD version that has a different mix of the music on it, NO Downloads whatsoever, and the sleeve has to be wrap-around, like it could be a poster, on thicker card too, full colour mind!...we are Koolaid (Global Tyranny) on this record...send us some copies when its done"....

Well that was telling us, so we had to put the record out. We listened to the CD again; it was bonkers, some wild psychedelic noise stomping round the room, meshed with some dark samples, really heavy and LIVE drums, almost a non stop mix of edge-of-the-seat paranoiac scuzz, with loops that pulse through the entire record. Like a modern day mix of the avant pop samplings and cut-up wizardry of Negativland, the obscure fractal pop psychedelic rock of the West Coast Pop Art Experimental Band, some of the white hot guitar of the Stooges / Loop variety, and a primal beat /rhythm that could have been lifted from Cro-Magnon..

We started putting the RSD 2011 12" together, when another missive arrived, this time the message was simpler..."when's our LP coming out? And can you put this out too, we are Koolaid (Alien Ballroom) on this track...", that was a crunchy, noisy version of Daft Punk's "Da Funk", and nothing like this album..we put it on the RSD Agitated 12" release.. they fitted in well.. And no, we have no idea who is in the collective, band, or whatever they are or might be..in a way, that makes this even greater.... " - Agitated Records.

Darryl says: The mysterious Koolaid drop their debut album and what a scorcher!! Think Sun Araw mixed with Negativland and the burnt-out psyche guitars of Loop. Superb!!