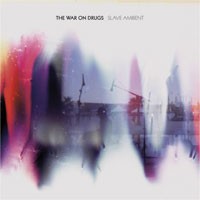 Philadelphia’s The War On Drugs are the vehicle of Adam Granduciel, frontman, rambler, shaman, pied piper guitarist and apparent arranger.

‘Slave Ambient’, their second album proper, is a brilliant 47-minute sprawl of rock ‘n’ roll, conceptualized with a sense of adventure and captured with seasons of bravado.

Recorded over the last four years, the album puts the weirdest influences in just the right places. Tom Petty and Spacemen 3, ‘Neu! '75’ and ‘Blood On The Tracks’, Flying Saucer Attack and Bruce Springsteen, New Order and No Wave, The Byrds, Bread and Burt Bacharach. How is a music fan supposed to reconcile all of this?

Andy says: This is a beautiful, hazy, rock'n'roll record, which, sure enough shimmers and thrums and is actually semi-ambient. Check all the tasty influences listed below, but if I told you that Kurt Vile is a sometime member of this band and that this was like a mysterious cousin to Vile's "Smoke Rings..", then you'd get the feel of this album right away. Cool.