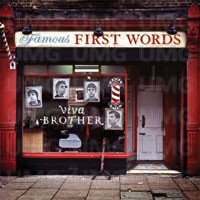 Viva Brother formed in Slough in January of 2010, over a joint love for the likes of Suede, The Smiths and The Stone Roses. Just over a year later they now find themselves on tour with their hero Morrissey, have an NME cover under their belts, are Zane Lowe’s Hottest Record In The World on Radio 1, and are on prime time TV in the US, on the revered Late Show with David Letterman.

Speaking about the recording of their debut, frontman Lee Newell said, "Working with Stephen Street was a turning point in this band and with him we have created something completely extraordinary. It seemed very natural. We're not going to sit here and sell ourselves because that's not what we're about, we're going to do things our way and have an absolute laugh with it. Everyone says that we are famous for what we say. This album is what we've been talking about."

“…the year’s most brilliantly brash young upstarts…” – The Fly.

“(Viva) Brother are as sharp as their songs are direct…” - The New York Times.