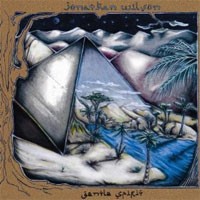 'Gentle Spirit' is not simply the name of the debut solo album by songwriter / musician / producer Jonathan Wilson, it represents the ethos of the artist himself. Warm, supple melodies etched in layers of stringed instruments and willowy organ motifs accompany his earnest, North Carolinian drawl as he tells tales of humane values lost and found.

Wilson’s music is steeped equally in the woodsy contours of his Blue Ridge experiences and the atmospheric guitar reveries of Neil Young and Quicksilver Messenger Service. In fact, 'Gentle Spirit' is remarkably evocative of that golden late ‘60s, early ‘70s period when rural and urban sensibilities colluded in producing some of rock’s most imperishable recordings.

Wilson, a native of Forest City, North Carolina, has been quietly earning a reputation as a musical jack-of-all-trades. He is adept behind the recording console, possesses a luthier’s knowledge of all things strummed, and maintains the innate ability to conceptualize an instrument essential to providing the right colour to a track in need of a defining detail. Whether working with promising new acts like the band Dawes, celebrated contemporary artists such as Erykah Badu and Elvis Costello, or Rock and Roll Hall of Famers such as Jackson Browne and Robbie Robertson, Wilson provides direction and support as tasty and soulful as anyone in the business today.

It should then come as no surprise that Wilson, so resolutely committed to “old school” musical values, began recording 'Gentle Spirit' in Los Angeles’s fabled Laurel Canyon. As a long-time student of “Canyon culture,” his ideas echo many of an earlier generation as the album embraces a unique blend of folk, country, rock and roll and pop elements, which enduringly create a sense of time and place. After leaving Laurel Canyon, Wilson relocated to the Echo Park section of L.A, home to his new recording studio, to finish tracking and mixing 'Gentle Spirit'. “I recorded everything to analog tape which I’ve always done; it’s not something I’m trying to do as a boutique kind of hip thing. Analog simply captures things better and it takes the edges off. It creates a beauty much like film.” The album was mixed by Wilson and Thom Monahan, who has worked with many artists, including Vashti Bunyan, Devendra Banhart and Vetiver.