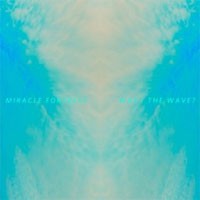 Graham Van Pelt, a.k.a Miracle Fortress, has no problem testing our patience. His latest LP 'Was I the Wave?' showed up relatively unannounced in April, four years after the Montreal experimentalist embraced his hermetic tendencies and seemingly vanish into thin air. It’s no surprise Van Pelt’s voice doesn’t appear until well into the album’s second track; if nothing else, he fancies himself a musician worth waiting for.

But Van Pelt is fully aware a four-year break stunted any momentum garnered by debut 'Five Roses', so, on 'Was I the Wave?' he builds from the ground up. Where 'Five Roses' got by on it’s warm textures and whimsical melodies, 'Was I the Wave?' is more traditional studio-junky electronic album. The songs are sample heavy and loop driven with tinny and pitch shifted vocals. And while this style of production often breeds songs that never quite leave the ground, Van Pelt avoids these pitfalls with engrossing pop melodies and a mixing board virtuosity that would make Richard D. James blush.

Standout tracks like ‘Everything Works’ showcase Van Pelt’s gift for fleshing out a song with samples; Electronic freakout “Immanent Domain” unravels into a lone electric guitar riff, before bleeding into album closer “Until”: a duet between two clean guitars. Van Pelt leaves us not with the lush studio work that gave the album life, but with the organic instrumentation hidden beneath it, asserting that with Miracle Fortress, a little patience goes a long way.