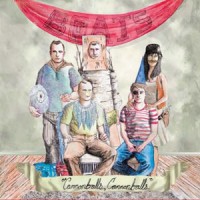 Boats makes music songs in Winnipeg, Manitoba, Canada. Sometimes their songs are about fictional performing duos who have holes in their bodies and/or have a belief that they will one day give birth to a flock of birds. Sometimes they are about winning the Superbowl and finding buried treasure. Often they are about failure and death. A noisy indie-pop band with high-end hopes but low-end equipment, Mat Klachefsky's bizarre vocal chords mixed with his infectiously catchy pop songs and boundless energy have been freaking out audiences ever since they released their critically acclaimed first album "Intercontinental Champion" to local audiences in October 2007. Since then they have embarked on several North American tours, played packed houses at SXSW, NXNE, Pop Montreal, Halifax Pop Explosion and Sled Island.