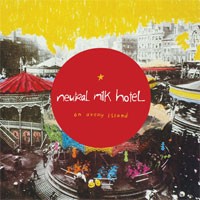 Re-issue of the explosive 1996 debut by Neutral Milk Hotel. Jeff Magnum's songs are cryptic and crazed, his ideas fast and furious, and together they force the home-recording concept out of the basement and into a brave new world, a fuzzy masterpiece of experimental lo-fi recording. Full of rapid-fire wordplay with true and heartfelt experimentation, both ambitious and eclectic, it's not hard to see why this has been such an influential album. Part of the fabled Elephant 6 collective, Neutral Milk Hotel won over many a music critic with this cult classic.

The band are recognized as one of the most influential alternative acts to come out of the mid-90s and sowed the seeds for everything from anti-folk to the likes of Arcade Fire, Caribou and even Franz Ferdinand. On its original release, this album ranked #35 in the annual Village Voice Jazz & Pop Critics' Poll. Also, Spin proclaimed this album one of the ten best "you didn't hear" of 1996.

Neutral Milk HotelIn The Aeroplane Over The Sea

Neutral Milk HotelIn The Aeroplane Over The Sea