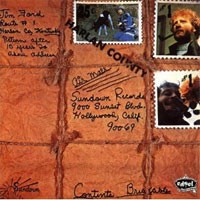 Another absolute gem of a reissue from Light In The Attic.

What happens when a musically minded country boy from rural Kentucky heads to the Golden State and makes an album of blue-eyed soul with Dr. John, Jim Keltner (John Lennon), and James Burton (Elvis Presley) as his back-up band? Well, if the stars were aligned, singer songwriter Jim Ford would’ve had a major hit on his hands. As it was, 'Harlan County', released in 1969 on the minor label Sundown Records, simply fell through the cracks between monster selling titles by The Beatles, Led Zeppelin, and Creedence Clearwater Revival. Despite being allied with some of the biggest names in the business and a deft musical touch - Ford wrote songs for Bobby Womack (“Harry Hippie”), Aretha Franklin, P.J. Proby, The Temptations, and even appeared on Sly & the Family Stone’s 'There’s a Riot Goin’ On' - Ford never struck gold as a solo artist and eventually left the often cutthroat music business for a quieter life at the turn of the 1980’s.

“Jimmy Ford is the baddest white man on the planet,” said Sly Stone of Harlan County’s main man, and listening to the album today who’s to argue? Needless to say, Light In The Attic Records are honored to re-release these ten emotive country-soul songs on CD and LP with Ford’s original cover artwork, beautifully re-mastered audio, extensive liner notes by Kurt Wolff (The Rough Guide to Country Music), and rare photos, all presented with an adult portion of love. Fans of Charlie Rich, Tony Joe White, Lee Hazlewood, and Bobby Charles, please take note. 'Harlan County' is a revelation to deep music heads and for the previously converted, an opportunity to revisit one of the California studio scene’s crowning glories. To quote the title of Wolff’s booklet essay, “Jim Ford’s Music Will Kick Your Ass And Blow Your Mind.”

Armed with a powerful whiskey fueled voice, down home rhythms, tight horn section, and occasional spectral orchestration from Gene Page (The Righteous Brothers, Barry White, Marvin Gaye), Harlan County is ripe for reappraisal. And though Ford is unfortunately no longer with us - he passed away in 2007 - his musical legacy lives on. With fans and friends including Brinsley Schwarz leader Nick Lowe and actor Marlon Brando it’s safe to say that Jim Ford was the real deal. So head over to your local brick and mortar record shop, hit the liquor store for a bottle or two, and turn up the stereo. Take a country-funk trip to Harlan County. It’s cheaper than a flight and will take you right where you need to be.