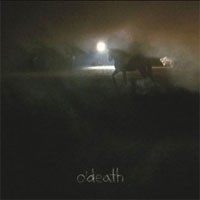 With the help of producer Billy Pavone (The Fall, Asobi Seksu, White Rabbits), the latest O’Death opus, Outside, is their subtlest work by far, but also the most impressive of the band's career. This is a record that lives up to its name with spacious and cinematic arrangements, layers of subtle percussion, and at times an impenetrable wall of found sound.

O'Death recorded the album over a two-month period, easily the longest they've ever spent on a production. The extended recording time allowed the band to write in studio, as well as cultivate the organic noise for the record in an intimate setting. As Pavone observed, "Creating the album in the recording, and not in the mix, was a leap of faith for me. It was challenging to let go and allow the album to breathe a bit, and be its own creation– unique and very different from some of the sounds we hear so often in the world of digital manipulation.

The result is a record that is both the most subtle and massive accomplishment of the band's career, a darkly triumphant and free-flowing album that represents exactly where the songwriters have found themselves in this moment. As Pycior notes, "I love the dynamic disparity in the album: the fragile parts of ‘Bugs,’ ‘Ourselves,’ and ‘Don't Come Back...,’ the huge endings in ‘Alamar,’ ‘Look at the Sun,’ and ‘Pushing Out.’ I know we have the right sequence this time around… and I love ending on a different and demented tone with ‘The Lake Departed.’”