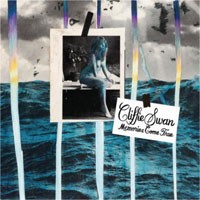 Cliffie Swan used to be the American band called Lights who put out two CDs - a self-titled release on Language Of Stone and ‘Rites’ on Drag City.

Not a debut, nor really a third album, ‘Memories Come True’ is equal parts bravado and vulnerability. A story of leaving, perhaps, unrolls over the course of these eleven songs, resulting in an album of absolutely soulful and sultry rock gems.

Physically separated by the vast spaces of America during the writing of the album, Linnea Vedder and Sophia Knapp built ‘Memories Come True’ like a bridge across the air.

This is a hyper real version of pop, the colours super saturated, the contrast upped. The songwriting is concise and aims straight for the heart. Linnea and Sophia sing with the voices of angels dragged through Nashville and Laurel Canyon in the 70s, crystalline and crying inside.