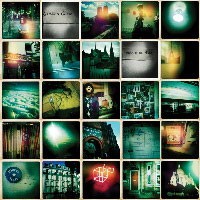 Golden Glow’s debut, 'Tender Is The Night' is an upbeat Brit-pop album swarming in romance. Whether on the album’s more pop-based tracks (“Adore Me” “Locked Inside” “Books”) or the more hazy meditations (“The Blizzard” “On My Own”), Pierre Hall proves that you do not need million dollar studios or technically perfect performances to capture meaning and feeling in music. To say the recordings are raw is to do story of this album’s creation a disservice. After suffering a serious car accident that left him unable to walk for close to six months, Pierre Hall created Golden Glow, wrote the songs, and forced them onto his four-track with pure determination. When finished, he toyed with the idea of re-recording the songs in a cleaner studio. Then he thought of releasing the songs in their original form but limiting the outlet and calling them demos, but everyone who heard the tracks gave the same advice. Don’t ruin the magic was captured on that four-track. Don’t clean-up the charm. Release the music as it is. 'Tender Is The Night' is the result.

Golden Glow is the charming solo project of Manchester singer/songwriter Pierre Hall. Son of a British father from Trinidad and Tobago, and a Mauritian mother, Pierre established himself in Manchester first as a party promoter and then fronting the Brit-pop band Lead Balloons. In late 2009, Pierre began to write songs as a solo artist. Naming his new project Golden Glow as a tribute to the band Felt, he used a dark period of his life to capture what he was feeling through his music. Starting simply, and sticking to the DIY aesthetics that have marked Manchester bands since the first days of punk, songs were written and recorded on a four-track with minimal equipment and no grand plan for where things might end up. After befriending and opening for The Drums, the track “Adore Me” was included on a compilation for their label, Holiday Records. By late 2010, the set of songs that were to become Golden Glow’s debut, 'Tender Is The Night' were completed and a series of lo-fi music videos began to get attention around the internet. With a beginning equally dependent on talent, necessity, and happenstance, Golden Glow is a project that deserves the recognition that is surely coming its way.