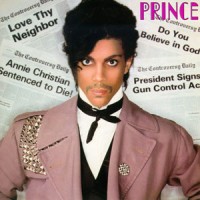 "Controversy", Prince’s fourth album, was originally released by Warner Bros in 1981. For the most part, the album was an expansion of its predecessor, 1980's "Dirty Mind", continuing the mix of electro-boogie, crazy new wave-influenced funk-rockers tailor made for US high school movie soundtracks (like, wild!) and sleazoid ballads (ditto). This record was considered to be his most political to date. The album was also an important stepping stone from his early works to the more mature song writing of the mid 1980s. Worth every penny for the title track alone (surely one of the best 80s boogie-disco records?), which will set you back £20 on a 12" all by itself.