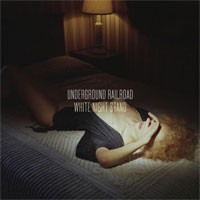 Parisian émigrés Underground Railroad return with a brand new album ‘White Night Stand’, a record that finally strikes the keynote of what the band are all about.

Across its 11 songs, produced by the band in London's Stamford Hill, guitars explore and meander, circling the biggest melodies of the band's career so far. It's intense and amped, touching and subtle at points and hugely tuneful, taking in early Radiohead and Liars as well as the beloved American alt rock bands that made the three fall in love with music in the first place.

There are moments of fitting intensity. Most notably 'Seagull Attack', the album's crescendo centrepiece, that clocks in at over nine minutes with its hypnotic repetitive guitar cascade. Then there's the distinctly Radioheadesque 'Ginkgo Biloba', another album highlight.

Further inspiration across the album came from ‘Twin Peaks’ and David Lynch, with Marion naming 'The Black Widow', 'The Orchid's Curse', and 'Traces To Nowhere' after episodes of the show, and 'Yellow Suit' in reference to his 'Blue Velvet' film.