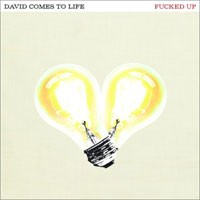 The rock opera: the final word in decadent capitalist-pig rock. The kind of tediously long, navel-gazing fodder from which faded rock dictators cling onto power by their filthy fingernails. Breaking with rank unsurprisingly, then, come Fucked Up, one of the most vital punk bands around and people who aren’t scared of a challenge.

Following up their Polaris Prize winning breakthrough, ‘The Chemistry Of Common Life’, their third album ‘David Comes To Life’ is no less monumental. Split across four acts, it sees increased female vocals work in perfect contrast to Damian Abraham's wounded bull growl. The band, meanwhile, provide more space for the flourishes and imaginative song-writing that entwine their love of fey British indie pop with heavy riffing, amidst some genuinely twisted turns. Perhaps most grippingly, the triple-guitar interplay between Mike Haliechuk, Josh Zucker and Ben Cook has risen to symphonic levels. Together, they channel the energy of musicians ranging from Angus Young, Pete Townshend and Noel Gallagher, to Bob Stinson and Lyle Preslar, displaying a consummate ease and ferocity.

Then there comes the story that ties it together: ‘David Comes To Life’ appears to be a parable of lost love, global meltdown, depression, war, guilt and madness. Or is it? A modern day morality tale set to the dour backdrop of a British industrial town in the late 70s, the narrative follows the dark moods and inner psyche of its titular hero. At the same time, the reliability of the narrator is called into question, the tables are turned, responsibility shifts, and the story takes on a meta twist. It’s a fantastically complex concept that somehow works as a coherent narrative, while the mind-altering subject matter sits perfectly with the intense music.

Of course, you could always ignore the back-story and instead listen to a fiercely imaginative, powerful 78 minutes of blistering, melodic rock ‘n’ roll, crossed with all manners of psychic weirdness.