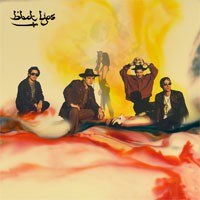 Founding fathers of Atlanta’s “flower punk” movement the Black Lips release 'Arabia Mountain', their sixth full-length album, on longtime label Vice Records. 'Arabia Mountain' was recorded between Brooklyn and Atlanta over the last few months of 2010 and with the collaborative assistance of celebrated DJ and producer Mark Ronson, Lockett Pundt of Deerhunter, and a human skull with a microphone jammed into it.

'Arabia Mountain' also marks the first time the Lips have worked with an outside producer. Mark Ronson, best known for his production work with the likes of Nas, Adele, Kaiser Chiefs, Duran Duran, Lily Allen, and Amy Winehouse, recorded nine of the album’s tracks at MetroSonic studios in Williamsburg, Brooklyn, amid a 10-day bender of late nights and one hospital visit. He then came back to Atlanta's Living Room studio for an additional 5 days to add the finishing touches.

“I was already a fan of the Black Lips coming into it and I definitely didn’t want to fuck up anything,” Ronson told Rolling Stone in December. And fuck up he did not. The production tests the limits of modern amplification technology, harkening to the full, meaty sound of Fun House or Lola Versus Powerman or whatever your favourite record of 1970 is.

Darryl says: Well, I've been really surprised and totally bowled over by this album. 60's Nuggets drenched 'flower punk' expertly produced in the main by Mark Ronson - yes THE Mark Ronson!! Check this out if you liked the last Black Angels album.

Sara says: Produced by Mark Ronson this 16 track album pulsates with frenetic energy from the off, aided no doubt by the fact that over half of it was recorded during a 10 day bender! The Atlanta band’s sixth album begins with the fabulously raucous 'Family Tree' - a drunken sax-assisted stomp through “Nuggets”-style garage-rock territory. The unhinged sixties vibe continues with “Modern Art”, probably the only song ever written about being off your face in an art gallery. The lunacy reaches its peak with "Raw Meat”, in preparation for which Black Lips all ate liver sashimi, resulting in Ronson's hospitalization. However there was clear method in the madness as the raw (no pun intended) Ramones feel of the session testifies. "Dumpster Diving” is a classic Stones-esque honky-tonk number which sees the Black Lips waxing lyrical about rooting through dustbins. LP Closer “Keep On Running” is a creepy end to a cheerfully infectious album that gets better with every outing.