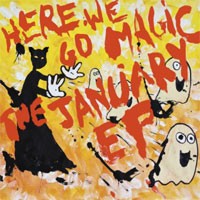 "The January EP"s six songs complete the songwriting cycle that Here We Go Magic began in an upstate New York farm house upon the commencement of their critically-acclaimed sophomore album "Pigeons".

"Hands In The Sky" is a ghostly number that showcases vocalist Luke Temple's lyrical pedigree.

At the centre of the mini album lies a dichotomy between eerie folk sounds and driving art rock. The jangly back-and-forth between the guitars of Michael Bloch and Temple form the backbone to "Song In Three", the yin to "Pigeon"s standout "Collector"s yang.

"The January EP" was produced by Jen Turner and recorded live to analog tape in a band-built living room studio.

TurncoatWasted On You / There Must Be Something