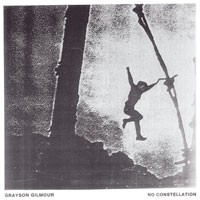 So, perhaps we could tell some romantic story about a kid who turns to music during their early teens in an effort to save themselves from the boredom of swampy small town New Zealand. A couple of albums later they pack their bags for the big smoke, chasing the dream, etc etc... Add a few more releases, four or five years and now we have "No Constellation from Grayson Gilmour".

Hailing from Palmerston North, Grayson Gilmour began his solo recordings at age 16 and has now teamed up with the re-launched Flying Nun for his fifth album "No Constellation". As one quarter of New Zealand band So So Modern, Grayson has spent the last years juggling between playing and recording with the band and his own 'bedroom/studio recluse' projects. All up "No Constellation" is a culmination of ideas built up over the last two-years - much of which he spent touring overseas with So So Modern. With a pile of praise in his home country and the New Zealand Herald declaring it; 'a clear contender for local record of the year.'