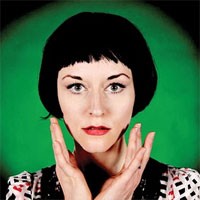 Joining the esteemed company of past Green Series participants BP Fallon and Conan O'Brien is Amy Walker. Amy is an actress who has made quite a name for herself as an expert in the field of replicating accents from all over the globe, as evidenced by the over 5 millions views of her "21 Accents" video on YouTube not to mention appearances on the Today Show and Inside Edition.

On the a-side Amy runs through her wide selection of different accents as a improvisational rolling internal dialogue. The a side also contains a reading from a random article in the local newspaper, each sentence in a different accent from around the world performed live.

On the b-side, she's interviewed by White discussing everything from the overuse of the word "like" by modern teenagers, offending people by speaking in their accents and a wide-range of other topical subjects in an exploration of accents and dialects and how they relate to peoples preconceptions, and influence prejudices. In the spirit of the Amy Walker single, Third Man is printing an unprecedented 30 different sleeves, each one depicting Amy as a different persona or character.

We Are HexTwist The Witch's Titty