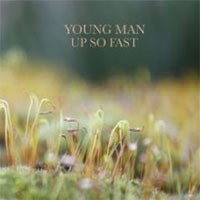 Colin Caulfield, aka Young Man may already be familiar to some of you for his reworkings of his favourite song, including a cover of Deerhunter's "Rainwater Cassette Exchange" which Bradford Cox described as "fantastically superior to the original". An accolade indeed!
Now Young Man brings us his debut UK single "Up So Fast" which is a lovely uplifting dream-pop number. Kicking off with simple stripped back guitar strums and vocals, the drum rhythm - a series of mini drum rolls, gradually builds to create a shimmering pop haze before it changes direction once again as it winds down to a finale.
Fans of Altas Sound, Deerhunter, Animal Collective, Panda Bear etc should take note.
Pitchfork: "acoustic guitars that give off the whiff of sunscreen, sun-baked loops, easygoing percussion, vocals blanched in reverb, and lyrics that take an 'aw shucks' wistfulness to growing up."