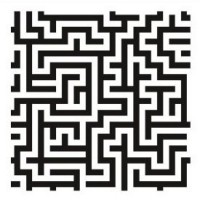 Formed in San Francisco in 2009 by Wooden Shijps guitarist Ripley Johnson and his partner, Sanae Yamada, Moon Duo’s first two critically acclaimed EPs, "Killing Time" (2009) and "Escape" (2010), fused the futuristic pylon hum and transistor reverb of Suicide or Silver Apples with the heat-haze fuzz of American rock ‘n’ roll to create tracks of blistering, 12-cylinder space rock. Now their debut album "Mazes", recorded in San Francisco and mixed in Berlin during 2010 as the band prepared to move to the mountains of Colorado, explores a far broader, lighter, sound.

That’s most clear on the dreamy organ and skipping riff of the title track, which recalls the Velvet Underground, or the handclaps and swinging organ bloops over the potent shredding and guttural riff delivered by Johnson in "When You Cut": 'He is an incredible guitar player', enthuses Yamada, 'He is one of those musicians who has the ability to elicit a guttural, corporeal response in the listener'. Throughout, "Mazes" is the sound of Moon Duo carving out their own identity, looking to the horizon, and moving forward.

Ripley says that, as a guitarist and songwriter, delineating between Moon Duo and Wooden Shijps 'happens naturally. I focus on one project at a time, and the way the two bands operate is very different. And there are certain limitations that Moon Duo is forced to accept, not having a drummer for example, and I really like that. I like the creative challenge of working with limitations. Having done so much home recording cultivates that. Working with one other person is much different from working with four'.

Yamada is happy to discuss how the romantic relationship at the core of Moon Duo has affected "Mazes": 'Any creative partnership involves a certain level of intimacy, as does any coupling. In each type of partnership you understand certain things about the other or others involved based on the nature of your interactions', she explains. 'To mix the two is kind of a melding of intimacies – you discover different dimensions of knowing the other person. At the same time it is hard to distill specific aspects that that dynamic brings to the music'. And she insists: 'The music is the music'.

'We wanted to do something in a more ‘rock 'n' roll band’ style, something a bit fuller than our previous recordings'. In terms of recording this meant that Moon Duo 'used more tracks on this record, in order to get a denser, layered sound to make this our ‘rock band’ record. I grew up a huge Stones fan, so I've always liked that dense sound, with multiple guitar tracks, percussion, piano, organ - anything you can squeeze into the mix'.

This meant a vastly different recording process to Moon Duo’s first two EPs, which were recorded fast and at home. "Mazes" was a more drawn-out process, involving proper recording studios for the first time including the trip to Berlin to mix and re-record certain parts and the track "Run Around". 'The working title was Die Blumen [the flowers], so going into the mix sessions we kind of felt like it was becoming our ‘Berlin record’, but in the end it retained the stamp of San Francisco and we liked Mazes title better anyway'. And ultimately, "Mazes" is a definably American record, recorded against the backdrop of the Johnson and Yamada’s move from the Californian coast to the heights of Colorado. 'I think a lot of our music has something to do with the mythology of the road', muses Moon Duo’s Sanae Yamada. And if "Mazes" is a quest, a journey through American landscape and music, Johnson concludes that its key is 'finding one's place in the world; moving forward, and the different paths one takes moving through life, trying to reach various goals, literally moving; love; pain; change. Or just getting by, and making sense of things'.

Darryl says: All the Moon Duo dynamics are in place; repetitive grinding riffs and the swirling keyboards, but with an added 60s garage-esque bounce the songs really shine through.

Moon DuoCatch As Catch Can / Set It On Fire (Repress)