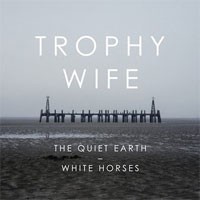 Backed by the majestic "White Horses", where glimmering vocals offset the stunning violin and sparse rhythms before pulsating bass lines melt into the track, the song documents the misplaced sense of clarity you feel just before a comedown, the simultaneous feelings of invincibility and vulnerability. Trophy Wife’s new single delivers on the initial promise "Microlite" showed and hints at what the future holds for them.

The band’s sound and aesthetic is informed by influences as diverse as Studio, Polmo Polpo, The Notwist, Hank Marvin and Tortoise. These influences can not only be heard in the band’s music and production, but also echoed in their artwork, photography and videos – all facets of which the three band members contribute to equally.