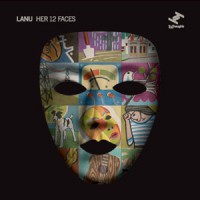 "Her 12 Faces" is the stunning new album from producer / guitarist Lanu, aka Lance Ferguson, the composer, bandleader and creative force behind acclaimed Australian funk outfit The Bamboos. Drawing on his passion for a sonic world where beat culture collides with indie, dream-pop, lounge and folk music, this solo record marks a stylistic point of departure for the prolific musician.

Lanu’s vision is completed by the captivating vocals of Megan Washington - one of Australia’s biggest and brightest new stars. Washington appears on all the vocal tracks - five in total. This pairing has created a sound that mixes modern, kooky immediacy and timeless charm. Think the eclectic, crossover appeal of Little Dragon, Feist, Emiliana Torrini, Charlotte Gainsbourg or Janelle Monae.