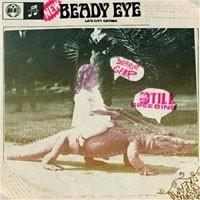 The album is preceded by "The Roller" which is the first single to be taken from the album and the third track Beady Eye have made available for fans after giving away a free download of "Bring the Light" via their website in November, and premiering a video for "Four Letter Word" on NME.com and the band’s own site on Boxing Day.

OasisStanding On The Shoulder Of Giants