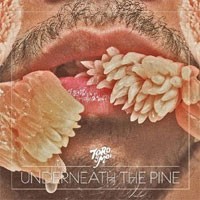 When Chaz first signed to Carpark Records, the plan was to release two records in 2010 - one electronic and one with live instrumentation - and although it didn’t quite fit into the same calendar year as his debut, "Underneath The Pine" is that latter offering. This release sees him following the same creative urges to completely different ends. Having spent the year listening to film composers like Ennio Morricone and François de Roubaix, Bundick returned to his home in Columbia, the birthplace of many Toro tracks of yore, to bring his new ideas to fruition. The result of these sessions is an album evocative of R. Stevie Moore’s homespun ruminations, David Axelrod’s sonic scope, Steve Reich-ian piano phrasing, and the pervasive funk of his first record. "Underneath The Pine" announces a new phase for an artist whose talent defies classification.

Toro Y Moi is 23 year old Columbia, South Carolina native and resident Chaz Bundick. His methods of music-making are constantly changing and evolving. Heavily influenced by his parent's vinyl and tape collection, he also possesses great admiration for contemporary influences like Animal Collective, Sonic Youth, J Dilla, and Daft Punk. Like most prepubescent teens, he had his punk band and once that died out, the "side project" soon became the main focus. Toro y Moi started in 2001 as a bedroom project but quickly grew into the live performance realm. The songs are born from a plethora of different genres, from freak-folk to R&B to French house.