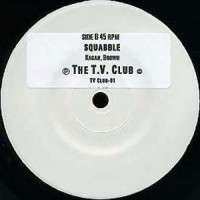 Intoducing The TV Club from Brooklyn, NY. Featuring Max Kagan on vocals, guitar, bass and keyboards, with Derek Brown on drums, percussion, vocals and keyboards. "Crush On You" is the debut 7" 45, self released single in an initial run of 290 copies. Recorded and produced in their studio in Downtown Brooklyn. The single has been described like this: "Crush On You" is a lo-fi gem that sounds like a mix of the Modern Lovers and early Television Personalities. The track shuffles, oozes cool, has a fantastic layer of lo-fi fuzz and vocal hooks at each turn.

Various ArtistsTitan - It's All Pop!