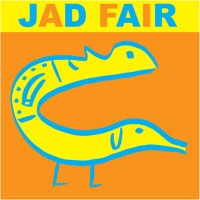 Jad Fair is by his own admittance a prolific artist, 'It takes a lot of work, and bands spend way more time in the studio than I do. Most of my albums have taken three or four days to record'. It comes as no surprise then that whilst releasing "Beautiful Songs - the Best Of Jad Fair", an album featuring both Jad’s own material and those created with Half Japanese and boasting over 100 tracks, that Jad can offer yet another contribution "His Name Itself Is Music", to what is already a considerable and esteemed bank of work, "His Name Itself Is Music" see’s Jad continue to embrace his emotive and raw approach to music making. An un-tuned guitar, his voice for beats and his expressive singing wavering in and out of pitch as if momentarily plucked from his generous subconscious.

'I love him for his boundless enthusiasm and shy genius' says Everett True, '.. maybe it’s wrong to call Jad naïve because he knows what he’s doing, but he has a child-like wonderment that to me is at the core of most great music I can name. The Shaggs, Leadbelly, Jonathan Richman. He makes my feet want to move, and there’s no higher compliment, I’ve seen Jad play concerts with a rolled-up newspaper and upturned wastebasket for rhythm, with just his voice for colour. I’ve also seen Jad play stadiums in precisely the same fashion – with a band behind him, sure, but with the spirit intact – in front of crowds of over 15,000, in support to Nirvana on their final tour'.